As the evolution of games has been rapid and complex, so too has it been with game soundtracks. Somewhere along the way, something extraordinary happened – game scores grew into standalone creations that could no longer be dismissed as mere ‘background noise’.

This article was first published at SapphireNation.

Many people got into specific games or learned about them via this wonderful medium. Gaming music became art, with the composers playing the heroes and champions. One of the most admired is Jesper Kyd.

Born February 3, 1972, in Hørsholm, Denmark, Jesper Kyd Jakobson started his self-taught  journey with music with piano and composition lessons, but soon enough he added classical guitar, choir and note reading into the mix. Little Jesper loved playing his Commodore 64 and he discovered that it’s a good tool for composing music. Soon he got interested in the demo scene – he discovered Amiga and joined a demogroup called Silents DK and started collaborating with a group of coders called Crionics. This cooperation gave us a taste of things to come – Kyd (with Mikael Balle) composed the music for Hardwired and my personal favourite – Global Trash 2:

Jesper soon moved on to different projects: He became a co-owner of video game company Zyrinx, which gave the world Sub-Terrania, with a soundtrack written by Kyd. Let it be said, if you remember this game, your childhood was awesome.

Here I go again on my own

At the same time Jesper also worked on the soundtracks for a few other games, though sadly these coincided with the demise of Zyrinx. Some might consider the dissolution career-ending, but not this creative bunch. The majority of Zyrinx people established IO Interactive, but Kyd didn’t join them, opting instead to travel the freelancing route and set up his own sound studio. And that changed everything.

The first fruit of that decision was his timeless score for Bioware’s MDK2.

He was also responsible for Shiny’s Messiah soundtrack, at least in a way – he created all the ambient sounds for the game. However, the soundtrack’s music was done by Fear Factory, an industrial band, which released it as their compilation album, sharing the game’s title containing no tracks written by Kyd. Shame! Shame! Shame!

Kyd met his old colleagues from the Zyrinx’ era while working on IO’s Hitman: Codename 47. It marked the beginning of a new chapter.

Agent 47 was well-received by fans and the industry alike. Six video games, novels, a movie (and a reboot of it) are proof positive. Kyd’s career hit a new stride. In 2002 he recorded the soundtrack to Hitman 2: Silent Assassin, ushering in his reign as one of the most diverse and epic composers in the gaming industry. Recorded with 110 musicians from the Budapest Symphony Orchestra and Choir, this is a score that keeps on giving: the longer you listen, the higher your amazement soars as your ears peel back the layers of detail. To no one’s surprise, it was nominated for a few “Soundtrack of the Year”.

Kyd once again met his IO colleagues while working on the soundtrack for Freedom Fighters.
One of the best soundtracks ever, sadly not appreciated enough (it did however get some love from the critics, receiving Soundtrack of the Year award). The mix of orchestra, choir and industrial elements creates an amazing journey. And you’re invited!

Kyd soon provided the score for the next installment of the Hitman series, Contracts, which earned him a 2005 BAFTA. For many this is one of the best soundtracks ever, or at least it was until Kyd outdid himself two years later with Assassin’s Creed score. Tragedy, war and mysticism shaped the soundtrack. As Kyd himself said in an interview: “The first game – taking place during The Third Crusade called for a tragic mood to the soundtrack. However, people were intensely spiritual during this time period and I wanted to capture that as well with tracks such as “Flight Over Jerusalem.” Dark, minimalistic, yet edgy, a mixture of orchestra, choir and ambient, it is no wonder the score’s fans became legion.

It was no surprise people were very eager to see what Kyd would present in 2009, when he was invited to record the score for Assassin’s Creed 2. Me? I’m not going to lie, I never liked AC1’s score all that much. It just doesn’t do it for me. I thought AC2 would be similar—after all, it is the same composer, right? What was left for him to bring out? 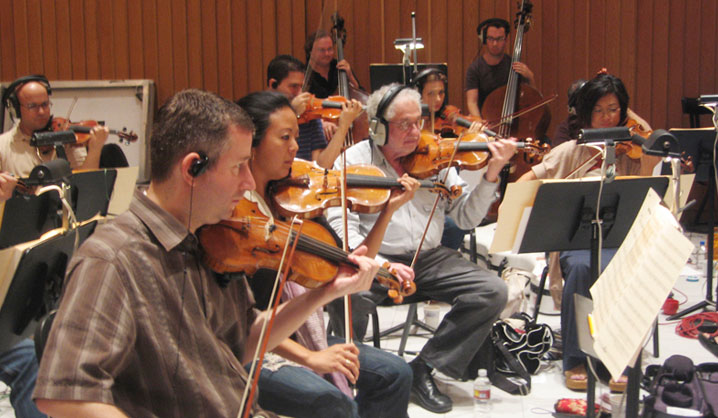 Well… Forgive me for sounding like a fangirl, but from the very first note this soundtrack stood out for me. Recorded with a string ensemble and a 13-person choir, the score once again includes vocals by Melissa Kaplan, a holdover from the AC1 score. Be it the opening “Earth”, the oft-covered “Venice Rooftops” or the widely loved “Ezio’s family” – this epic score has appealed to the masses. And to me! Compare “Venice Fight” to “Flight over Venice” or “Leonardo’s Inventions” to hear Kyd’s genius. I was sold, and will sing his praises: long live Mr Kyd, if this be what you give us!

What makes the AC series stand out in terms of music? As Kyd said: “I have been given a lot of creative freedom on the [ASSASSIN’S CREED] games and that has resulted in a music style that has been carefully crafted with the optimal amount of drama and originality. Obviously the inspiration for the music style comes from the games themselves.” For me, the style is masterful. Kyd’s reign was unquestioned, especially after the release of Brotherhood and Revelations (just compare Kyd’s contributions on that album to Balfe’s. Sorry, Lorne, nothing personal).

2009 also gave us Kyd’s Borderlands soundtrack. You want to visit Pandora? Jesper will take you there! And if you like the trip, fasten your seatbelt and get ready for some more fun, because he also wrote the score for Borderlands 2 in 2012.

2012 confirmed Kyd’s place in the pantheon of composers not only for the well-received Borderlands 2 score, but also the soundtrack to Darksiders II. While the game didn’t necessarily live up to expectations, the soundtrack exceeded them for sure.

In 2013 and 2014, Kyd showed his diversity and talent by providing the music for Soldiers Inc., Sparta: War of Empires, Pirates: Tides of Fortune and Stormfall: Age of War, all recorded for Plarium, a web-based game developer behind one of the top social games on Facebook (yes, FB has its own awards as well). Kyd’s work can be heard here: http://company.plarium.com/music/. It was definitely a sweet surprise for me to discover the sounds there.

2015 marked the release of Warhammer: End Times – Vermintide FPS, and Kyd once again inviting us on a journey through the unknown and, once again too, the journey proved epic.

Don’t let me down

Jesper Kyd is one of the most talented composers of our era. His oeuvre extends beyond gaming soundtracks to film scores including La Passion de Jeanne d’Arc or A Perfect Soldier documentary, a few short movies and TV series. The multiple awards and nominations he’s received show just how thoroughly his work is admired. And here’s something else to appreciate: I haven’t even mentioned all his work here, so there’s still a lot for you to uncover yourselves. Where will he take us next? While no one knows for sure, I’m pretty sure it will be a great adventure.

What is your favourite soundtrack or song by Jesper Kyd?