Like it or not, rating systems like PEGI or ESRB have become a part of gaming and are here to stay. With politicians calling for more restricted access to games, and gamers and parents more and more liberal, are the ratings helpful or necessary?

This article was originally posted at SapphireNation.

Pan-European Game Information (PEGI) is a rating system based on age and content. Developed by the Interactive Software Federation of Europe (ISFE), it was launched in 2003, with heavy support from the European Commission. It is used in over 30 countries, in Europe and beyond, and replaces similar national systems. But it’s not the only system used or organization responsible for ratings around the globe. Beyond PEGI, one of the best known systems is the one used in the States,  ESRB. But the more the merrier: Germany has USK, Russia has RARS, Australia ACB, Japan CERO, South Korea KMRB, Hong Kong COIAO. Brazil hasDJRTQ and ClassInd. The UK uses PEGI, but has also retained BBFC. Going into detail about each system would take all day, so here’s a table to put things in the proverbial nutshell: 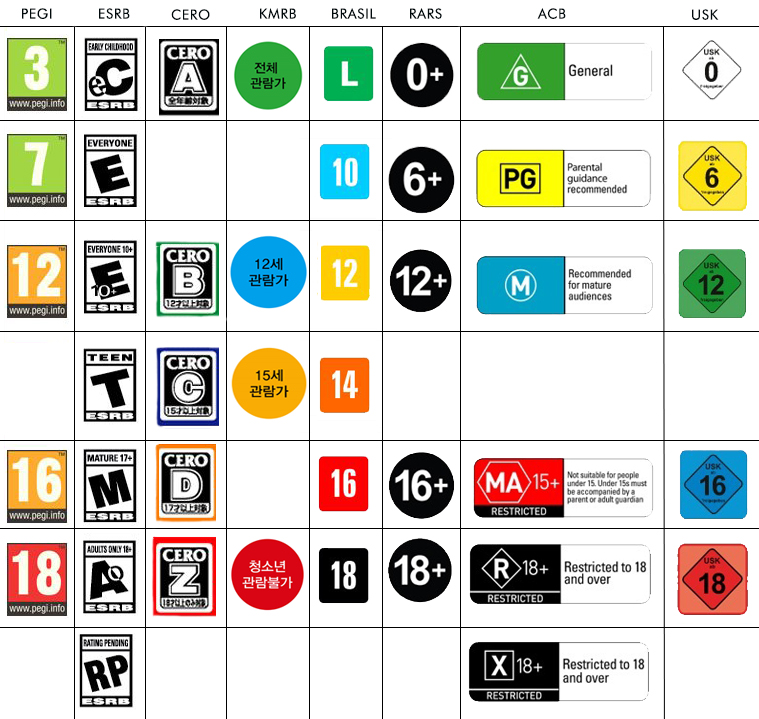 In theory, all ratings work the same way – an independent board of experts reviews the game submitted by the developers and assigns a rating to it, based on the source material and the aspects including violence, sex, swearing and mature content. To be sold on the market, games must bear the rating or inform consumers that they have yet to be rated.

That, however, is where the similarities end. The application process, fees paid, and even the rating given all vary from system to system. Their legal status also differs: in most countries, ratings are not legally enforced, so even though it’s illegal for you to buy a game rated as 12+ if you’re 11 years old, it is perfectly legal for a third party to buy it for you. 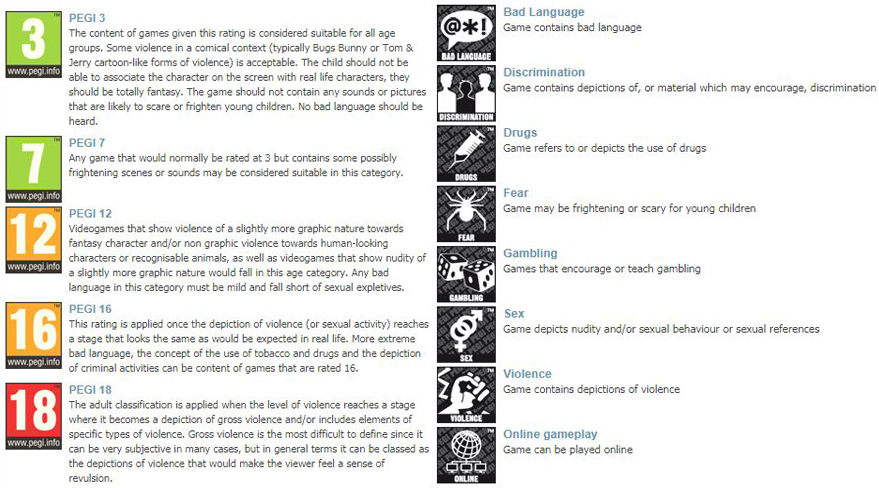 In some cases, the same game can have a different rating between the countries—and the differences can be odd. World of Warcraft: The Burning Crusade is rated 12 by BBFC, T by ESRB, 12 by PEGI and 12 by USK. Close enough, but ACB gave the WoW expansion an M rating – for teenagers aged 15 years and over. For Australia, “Mature” is 15+, while for the US it is 17+. It gets even more chaotic when you realize that ACB has a Mature+ rating, which, if you think about it, is something like “PG 15+ R”. Ok, so close enough here, but the rating swings can be far more pronounced than that.

Sims 4 are rated “T” by ESRB for its “crude humor, sexual themes and violence”. PEGI has it as a category 12, due to its “non realistic looking violence towards human characters – Sexual images and/or sexual innuendo – Violence causing minor injury only.” Seems ok, until you realize that USK rates it 6+ and ASC an M, so 15+. RARS went even more restrictive and put Sims 4 in the 18+ category. 6+ in Germany, 18+ in Russia. What rating would you assign Sims 4?

An often repeated joke is that if it has guns, it’s going to be 12 and up, if it shows boobs it’ll be 16+, and if nipples put in an appearance – it goes right to R18+. An obvious joke… but is it? It’s pretty clear by now that ratings aren’t perfect, and at times the ratings boards struggle with the very thing they’re tasked with—rating the games, especially when it comes to teen audiences. For ESRB, Assassin’s Creed is 18+, but Batman: Arkham Asylum is T and I can’t help but think it should be the other way round. Mass Effect got an M (17+) from ESRB, but a 12 from BBFC and an 18+ from PEGI. ACB gave it MA15+ and USK has the whole series rated a 16+, apart from Mass Effect 2 gamescom demo, which is 18+. So if you are a parent that checks the ratings around the globe, you realize that Mass Effect is suitable for kids as old as 12 but they should be 15 and they can’t be younger than 16, but they can be 17 as long as they are not younger than 18. That’s how much sense it makes. Good luck making the final decision.

Both Skyrim and GTA V are also rated M, which confuses me when I compare them or look at Batman. What is boosting the ratings for games like Mass Effect? Is it really that much more violent than Arkham Asylum? Or is it about the sex scene? According to Common Sensemedia, parents who played the game say ME1 should be 13+ and kids gave it the same rating. The pattern behind some decisions about ratings is not clear.

To help you make the right decision, ESRB goes the extra mile and offers detailed rating information and a summary. This is all good and helpful, but sometimes it  gives you gems like this one: “Players can interact with scantily clad characters, listen to suggestive dialogue (e.g., “Is that a mana wyrm in your pocket, or are you just happy to see me?”), or view provocative dance routines performed by elves and other player-characters. One quest requires players to search for specific creatures amid a landscape covered with piles of brown feces. The words “a*s,” “bastard,” and “b*tch” occasionally appear in dialogue.”  This is World of Warcraft – Legion. Whoever wrote this review clearly isn’t playing the game, which leads us to another problem.

The short answer: no. Ratings are based on summaries submitted by the developers and on reviews of the material. Sometimes the experts will play a demo version of the game or request additional footage to better address the content with the rating, but they still aren’t playing the game. They don’t have hours to rate it and their decisions will always be subjective, no matter how hard they try. Ratings should help you decide if, as a parent or guardian, you want to get the game for a minor. Additional warnings can help you decide whether you want to see the game, even for yourself. The ratings are not the only path to choose, but as a tool should serve as a guide that can be complemented by online reviews, gameplay videos etc. And let’s face it, nobody knows you or your kid better than you.

The Good thing about a rating is that even though it is a subjective decision of reviewers, developers still have some input. To make it simple – you submit the information about the game with footage, in some cases suggesting a rating. It’s then reviewed and voila, you have yourself a rated game. If you don’t agree with the final verdict, you may petition it. You also have the same right as a parent – if you disagree with a rating, most systems give you an option to be vocal about it. And as a customer you can be sure that the developers submit full info to the board—unless they want the severe punishment that will be meted out for a failure to do so. Nobody wants to risk losing money.

In 2005, Rockstar released GTA: San Andreas and ESRB gave it a well-deserved M rating. Everyone was happy. But nothing lasts forever – the game contained a sex mini game that ESRB was not made aware of until someone wrote a mod and made the content available for everyone. Rockstar argued that they never intended to have that part of the material available for the audience. Since it hadn’t been accessible to the players, they can’t be held responsible for the actions of a third independent party. ESRB, however, stated that the material was there, within the game’s files, so Rockstar should have mentioned it. Since they didn’t, ESRB revoked the initial rating, forcing Rockstar not only to cease sales until a new rating was given, but also to address the suddenly wrong rating on the boxes that had already been printed. The rating was changed to AO (Adult Only) and that means a lot of problems for distribution, including a need to set it off in its display and even an outright ban from some stores. To retain the original M rating, the company had to remove the AO rated part of the game code. This is why if you check the ESRB site, you can see that San Andreas has two different ratings. 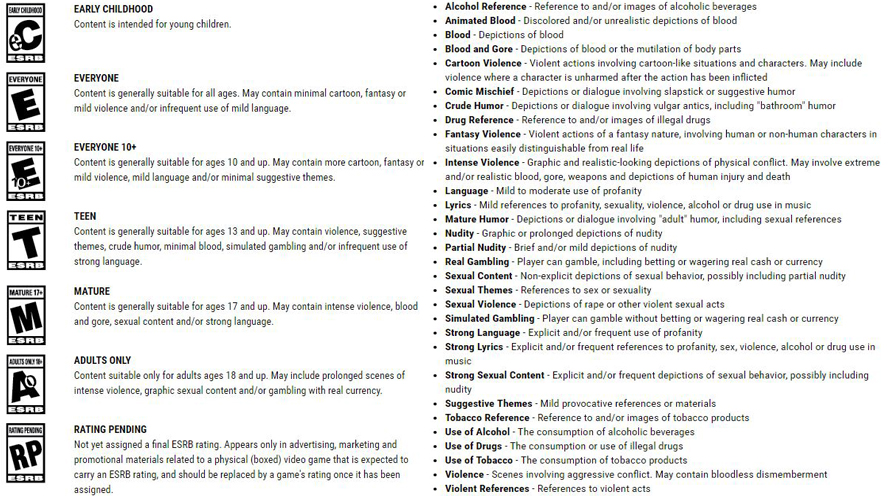 But does the rating system work?

According to science, it does.  In January 2017, research was released (Laczniak et al, 2017) claiming that “(r)esults demonstrate that children of parents who employ restrictive mediation efforts tend to play less violent video games, and the effect of these efforts is enhanced when parents use the ESRB system. This moderated effect also extends to reduce children’s engagement in negative behaviors in school.” And it is just one paper I’m quoting. “Cautious optimism” is the best way to describe science’s attitude here.

The problem with ratings is that all systems seem to be sheltering the kids and are more restrictive than parents, especially if you take into consideration how easily the web is accessed and what is freely shown on YouTube or even on primetime TV. Is it a safety measure or a “better safe than sorry” option? Or maybe the boards are too far behind reality? I don’t know. What I do know, though, is that in this age of the internet, if you’re 15 and you haven’t seen boobs yet, you’re a rare thing. If we treat the ratings as set in stone, they become a nuisance and a waste of time and resources. Not all kids are the same, and the same game can be received in different ways, even by adults. If a game is rated as 12+, does it mean you are not mature enough to play it a day before your 12th birthday, but then a mere 24 hours later, magic happens and you suddenly grow up? No. And again – you as a parent know your kid better than anyone else. But if we treat the ratings as a tool, a reference, they suddenly become very useful. We just have to use them properly. And this is a challenge.

Many politicians try to create laws that will enforce the ratings as a legal standard. Violent games lead to violence in real life; blame games for everything, bla bla bla. But it’s a matter of human nature that people work more willingly with systems that they choose themselves. If you force people to do something, they will dislike and disobey it. At this point, even though we see various ratings for the same game across the systems or we see games misrated, the system as a whole works in general. Parents become more aware of the issue and they trust the ratings. This is a self-regulating system and governments should do more to ensure people are kept informed, and the ratings are made as clear and visible as possible, not on forcing people to do something. The main goal of the rating systems is to protect minors and make sure the games reach their intended audience. There is still room for improvement, yes, and the system may never be perfect, but overall, in my opinion, game ratings are necessary and helpful. As long as we take them with a pinch of salt and apply common sense.

One Reply to “Game Ratings – Do They Work?”