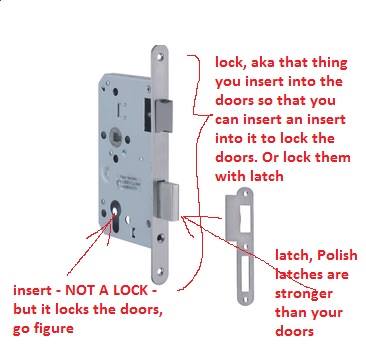 So I decided to fit in a lock into my doors. Easy job, you buy a lock and you fit it in, right?
WRONG!
Turns out there are different sizes of the whole thingie you put into the doors. Somehow I managed to take correct measurements and I bought the right one. Got it delivered and…where’s the lock and keys? Turns out – this is amazing, hear me out – when you buy a LOCK you don’t buy a lock, you buy an insert that is called a lock. That thing you called a lock is in reality called an insert. So that thing you call an insert, is in reality a lock. Lock is an insert and you insert it into the doors, insert is that thing you insert into a lock to lock the doors. I know right? I’m not even going to go there, I already had a discussion about it in like three shops with gear. Their workers start hiding when they see me.

Anyway, I bought myself an electric screwdriver, nothing can stop me now. Bought an insert to lock the doors. Put the insert into the lock – works. Put the lock into the doors…boom, application encountered an error, please try again. Turns out my doors are older than some countries and the hole where you put the key in is located at 80mm to the side. All current “locks” (inserts but they lock stuff so…) are at 70 or 75mm. There are no locks with the hole at 80mm, I can get 70 or 75 or buy new doors. My doors were made like a century ago, by Germans and they could stop a tank, I’m not getting rid of them. But hey, I have more tools, I’ll just cut the hole in the hole, makes sense, right? So I take the know out and start drilling. One side done, let’s move to the other. I turn to change the gear on my awesomesauce tool. Suddenly I hear a faint sound. Click. Millions of images run through my brain. Such click, much wow. Physics 101, air is not a steady substance, it keeps moving. When you have window in room A open and window in room B open, the movement of the air will be even faster and can be strong enough to close the doors. Doors that don’t have doorknobs in them because you took them out but still have the insert that can lock the doors thanks to the latch because you wanted to see where exactly you are cutting. Yup, I locked myself in a room without doorknobs.

50 brilliant ideas and 2 hours later…I’m desperate, I really need to pee and I can’t get out of my room. So I start tearing the doors down. I’m sticking stuff between the doors and the door frame like a proper amateur burglar. I had a brilliant idea of pushing the metal part that opens the doors to the other side of the doors so it falls on a newspaper and I can drag it in. Thank you McGyver. Sadly, it falls too far. Got a selfie stick I can stick through a hole and get it, boom, I forgot about doorstep, can’t reach it.

So it is me vs German doors. 45 minutes later, I feel something brushing my hair as I am pulling on the doors with all the power my mitochondria can give me. Doors open. But…where’s the insert? That thing that brushed my hair? That was the lock launched from the doors and door frame like a missile. I almost got it straight in my face. But hey, I’m out. PEEEEEEEEE!

Now that my bladder is satisfied, I can start fixing the doors. Turns out me Hulk, me strong, I managed to destroy the doors that survived a war. Polish latch was stronger than a German door frame. If that’s not a victory, I don’t know what it is. But hey, we’re fixing. Got a special glue for such stuff. I don’t know how pros do it, but I doubt they apply the glue with fingers like I did. Who would have thought that the glue that can glue the doors is so hard to be removed from your fingers? One thing is for sure – I am not taking my engagement ring off for a while 😉