I feel it is necessary to say that I did not drink or smoke anything that could interfere with my perception of reality before any of the events described in this post took place. We clear about it? Ok, so here it goes:

Eindhoven airport will always be a place that I love to hate and hate to love. I absolutely hate that place, but I love to be there and see events there, it is like Twilight Zone. Here’s what happened today: 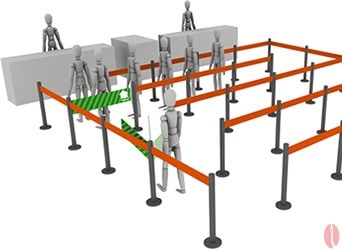 2. There was a guy talking in Dutchglish. He was a part of the airport personnel and – I think – was involved in personal luggage check.I say “I think” because he was saying some weird stuff and was looking into people’s belongings. He was also randomly pointing out at different pieces of clothing you had to take off. Nobody understood what he was trying to say, which ended up in some people leaving even socks for the xray, just in case this is what the guy wanted by pointing out to your feet and mumbling something like “sokkesock.” He was also mumbling to himself, which didn’t help in a hall full of people zigzaging to security check. He was speaking in a mix of Dutch and English and the only thing I understood was “ja-yes” said as one word. He was also randomly ripping trays with belongings from people’s hands, all this while shaking a roll of plastic bags at people. I think he wanted us to put liquids in the ziplock bags. I am not sure, neither were Dutch people standing in front of me.
Special shout out to the security lady I managed to confuse by asking if I should take off my boots. She said she doesn’t know because security gate makes sounds randomly and she doesn’t know if shoes set it off as well. GG!

3. After I zigzaged my zigzags, I managed to get to the departure hall. I was welcomed there by 3 Dutch guys dressed as Teletubbies (or whatever you call them). Red and Purple Teletubby were smacking each other with crutches. Green Teletubby was speedracing around the hall in his wheelchair. No, it wasn’t a part of a happening or flashmob, those were legit passengers.

4. Just as I was about to lift my jaw from the floor and take picture of Teletubbies, a group of 25+ men got in the way. It wouldn’t be anything weird, we are talking about gates at the busy airport, if it wasn’t for the fact they were all wearing dress suits. Full dress, dress suits, whatever you call it, they had also big blue bow ties and white vest. Each one of them also carried a funny red hat – sort of Donald Duck cap – in their hands. Regular passengers my ass.

6. Anyway flight to Waasaaa is boarding, flight to Wrocław is getting ready. You know what would be a great idea? To lead the passengers to the airport grounds and leave them there, clueless, right between gas tanks, planes and bicycles. Yup, they did that. +10 to charisma, just walk away while those people run like headless chickens.

7. Bikes, don’t even get me started on the bikes in NL. So you are slowly cruising on your nice black bike on the fields of the airport? Nice! There is a huge Airbus like 20 meters behind you, trying to taxi to the take off? Doesn’t matter, have bike. People wave at you trying to point out that THERE IS A HUGE AIRBUS BEHIND YOU? Wave back. And that gas tank that drives away from the plane, missing you by centimeters? Don’t stop to let him pass, you’re on a bike!

8. Just when I thought it can’t get any better, I spotted Teletubbies getting on the plane and taking selfies. They get on the plane, plane locks the doors, a tiny car starts to drive it to take off, but they stop midway. It’s that plane that is supposed to take 25 minutes before us. Cool. 25 minutes later I am comfy in my seat, looking through the window. That plane is still there, they forgot about it, so it didn’t take off. No fucks were given. In the end it took off like 5 minutes before us.

9. They forgot to send that plane to take off but we are already taxiing, so omg omg what to do? I know! It will be fun to send the planes taxiing around the airport! Yup, we were going in circles, on the ground, for like 15 minutes. 3 planes in total were just driving around. Fun!

10. Just before take off a Polish girl comes to the head stewardess and asks “excuse me, where does this plane fly to?” Cambodia. They checked your ticket like 5 times, do you really think it flies to Paris?

That airport will never stop to amaze me.